A brief history of our three churches

More detailed information is in booklet form which is usually available from the respective church. 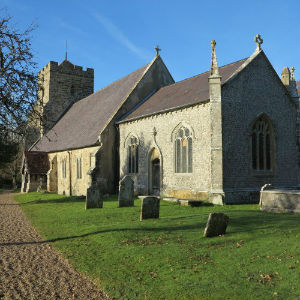 The nave is the oldest part of the church and is in the 13th century Early English style. There are still two of the simple lancet windows characteristic of the period remaining, one in the south wall and one in the north; the other windows in the nave are Perpendicular, a division of English Gothic architecture covering the period from c.1335-50 to c.1530.

Both outside walls of the nave have examples of the local 'winklestone', Sussex marble. This is a limestone formed from fossilised freshwater snail shells, Viviparus paludina. As the stone weathers, the fossils can easily be seen, especially on the south wall between the porch and the chancel. From the external stonework, it appears that the nave roof has been raised from its original position.
Inside the church, on the north wall at the east end of the nave can be seen an aumbry, a recess to hold sacred vessels for the Mass, and a piscina, a stone basin with a drainage hole where water used at Mass is poured away. There is another piscina on the south wall opposite. These probably indicate the existence of side altars in medieval times.

The roof is of single frame construction with tie beams. It is unusual in that the structure employs king struts supporting roof beams rather than king posts supporting a ridge beam. Some of the medieval timber used still remains.

On the beam in front of the chancel arch, are three pieces of church armour. Of the two helmets, one is Tudor, perhaps about 1540. The other, together with the third piece with the gorget or throat plate attached to it, dates from about 1660 and is a funerary helmet, specially made to hang over the tomb of a knight.

The outside of the chancel is unusual with diagonally set crocket pinnacles on the east corner. The priest's door has a high double-curved or ogee arch with delicate quatrefoils. In contrast, the bleak south windows of the chancel seem out of keeping.

The tower is Perpendicular and has the Pelham buckle carved on the label stops of the projecting moulding of the West doorway. The two shields in the spandrels are now unreadable; the left one had the three pelicans of the Pelham arms, the right shield bore the Colbrond arms of a fesse.

The two buttresses at the west end are not quite symmetrical. They may have been later additions to enable the tower to take the weight of the bells.

The tower now contains a ring of six bells. A sacring bell was provided by William Pelham's bequest in 1503 but this would have hung inside the church. When the tower first had bells installed is unknown but in 1686 it was reported that 'all things are in good order'. Five bells were cast, or more probably recast from the original bell metal, for the church in 1724 by John Waylett. He was an itinerant bell founder and would have cast the bells locally. Two of these bells were subsequently recast. The bells are hung in a cast iron side frame.

The interior of the church has changed considerably over the centuries. The gallery was added in 1821 to provide extra seating and to house the church musicians. In 1883 there was a major restoration of the church but the gallery was not removed until later, probably at the same time the box pews and the old three-decker pulpit were removed. The nave was refloored and a new organ was installed. The stone slab roof has been replaced with slates.

The old window of the chancel was removed during the rebuilding of 1765, but that was moved to the manor, Foxhunt Green when the current window was installed in 1884. The stained glass in the east window and south window in the chancel is Victorian and in memory of two Earls of Chichester and other family members. The window in the south wall of the nave is dedicated to the memory of Sir James Duke of Laughton and his son. 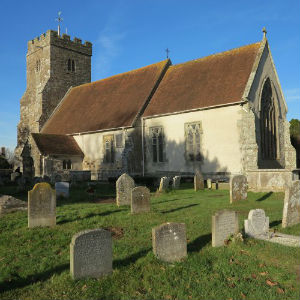 The Ripe and Chalvington church register started in 1538 and Ripe's original paper registers are preserved in the County records office. The advowson of Ripe church was presented to the St Pancreas priory, Lewes in 1100.

Ripe church is set on the edge of the village at Eckington Corner and is approached by an avenue of trees although many of these had to be removed from the pathway after the storm of October 1987. The Old Rectory lies to the right with Eckington Manor.

The church remained in the possession of Lewes Priory until the dissolution of the Monasteries in 1539. Ripe then passed to Thomas Cromwell. St John the Baptist Church is built of knapped flint and sandstone and has a square tower, which contains five bells cast in 1717.

There is a fine clock, which was installed in 1898 as a memorial to the Reverend Shuttleworth Sutton. The clock was rededicated in 1998 when Jim Beckingham was given a painting of the tower in recognition of the fact that he had wound the clock twice a week since 1958. He was also Church Warden almost continuously for some 50 years until his death in 2015.

The nave and the south porch date from the late 13th century. The chancel is perpendicular and has windows on the north and south side and a great east window.

On either side of the west door is a carving of an inverted Pelham Buckle which was an honour granted to John de Pelham for his part along with Roger de la Warre in the capture of the King of France at the Battle of Poitiers in 1356.

In the churchyard, close to the east wall are graves depicting skull and crossbones and the author Malcolm Lowry, is buried here. 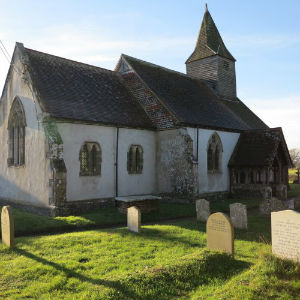 St Bartholomew’s, Chalvington is a small rural church built in the late 13th Century and is decorated with chancel, nave, shingle steeple style and a porch. The portrayal of Thomas a’ Beckett on the south window above the pulpit suggests that the church may have originally been dedicated to him. The North porch is modern although the old doorway remains decorated with sculptured human heads as does the window beside it.

The church was mainly constructed from flint with stone quoins and in 1999 some plaster was reportedly removed to reveal the remains of the south door on which there is a scratch dial showing the times of the mass.

The three bells inscribed 1609, 1609 and 1639 have been renovated, the Victorian choir stalls have been removed and a new flagstone floor has been laid.

One item of particular interest is the diamond-shaped board at the back of the Church above the organ. It takes up most of the West end of the Nave wall, so you can hardly miss it.It is believed to be a ‘hatchment’ of the type often used by the gentry from the 17th to 19th centuries. A hatchment is a funeral demonstration of the lifetime ‘achievement’ of the arms and any other honours displayed on a black lozenge shaped frame.

They were typically made of wood and canvas and, after the funeral were suspended above the front door of the family home for 6 to 12 months to show that the house was in mourning, after which they were disposed of or moved to inside the parish church.

The Chalvington hatchment has the arms of Baron Heathfield of Gibraltar on the right hand side and the arms of the Fuller family on the left hand side. The top right part has Gibraltar Castle with the key of Gibraltar in the gateway. It also has the mottos PLUS ULTRA “More on the other side” and RESURGAM “I shall rise again”.

The Fuller family coat of arms was acquired in late seventeenth century as a symbol of their status as country gentlemen. They were ironmasters in Heathfield, making cannons for the army.